Malcolm Muggeridge’s interview of Coco Chanel opportunely displays my great-aunt’s frankness in exposing her motivations.
Had the interviewer not been British, however, they would have been open to the most wayward misinterpretations.

Movingly vivid to me, some forty years after Coco Chanel’s death, is the sound of her voice transpiring from the words of that interview. 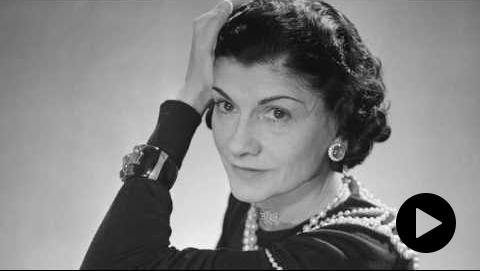 This website sets forth an unpublished interview given by Coco Chanel in September 1944 to the writer, journalist and – at the time – MI6 agent, Malcolm Muggeridge.

Since its first release on-line in 2012, the interview has evoked varied responses from a wide range of bloggers, journalists and Chanel historians. Extracts from the interview featured in Chanel biographies published in Britain, France and the U.S.

From a historical standpoint, that interview is now commonly accepted as significant, even though at times, Chanel's exposition of facts reinterprets the past.

However, in view of the interview’s considerable appeal, I felt it worthwhile to enlighten website visitors by supplying a wider context to this crucial conversation – the only account Chanel gave to a journalist about "her" war. Accordingly, this website sheds light on how it came to be, and on its appraisal by prominent historians.

To Muggeridge's critical eye, the interview failed to investigate Chanel's wartime activities in any depth. His expectations of eliciting an informed and impartial account from Chanel were, as it happens, necessarily curtailed in view of the circumstances in which the interview was conducted. And yet, despite the interviewer's dismissive evaluation of the exchange, those who researched Chanel's war have refrained from writing off that interview as a dead loss. Far from it, to all seeming since, to many website visitors, it unfolded the interviewee's lofty independence of mind in judging all those who held power during that leaden period.

In the course of my nine years of investigation into Chanel's war, I have been consistently forced to the conclusion that, until the disclosure of irreplaceable material at present in private hands, Chanel's repute cannot be immune from some outrageously unacceptable imputations.

Since the publication of the original “Chanel's War” website, a major concern that I share with the couturiere's great-niece, the late Gabrielle Palasse-Labrunie, is to shed impartial light on Chanel's own wartime testimony, as she confided it to trusted persons.

I had the good fortune to be closely acquainted with some of those key wartime witnesses, and I had hoped to unfold Chanel's account of that period during Gabrielle Palasse-Labrunie's lifetime. But the unhealthy climate of unreasoned defamation surrounding Chanel's conduct during the Occupation has caused me to defer the publication of the facts conveyed by that account. Moreover, the passing of time has apparently postponed for many years to come the return to the dispassionate atmosphere for which we yearned. Hence, it now seems appropriate for the concluding section of this website to outline the long-delayed book due to be published in France by Cohen & Cohen and featuring the preface written by Gabrielle Palasse-Labrunie.

Had those who are holding captive Chanel's war files opened them up to the scrutiny of historians, there would have been no cause for publishing this work. Let us therefore consider it as a first step, albeit significant, towards a fair assessment of Chanel's war, until the release of those archives ultimately corroborates her narrative.

I have done everything in my power to sway those who are posthumously censoring Chanel, and indeed, I took the bold step of challenging them directly in a YouTube video which was viewed by over 175,000 visitors in its French and English versions. Sadly however, the video, which can be accessed by the link above, has met with a deafening silence from those it challenged.

Against this background, it is expedient to publish Coco Chanel, the freedom-loving woman who defied the tyrants of her day. In so publishing, I hope this work would have won approval from my very dear friend, Malcolm Muggeridge, since my account attests to the same vigorous and self-assertive temperament as was revealed by his razor-edged questioning of Chanel in 1944.